The government has announced its intention to recapture Ireland’s share of the international student market, worth an estimated €2.5 billion to the economy.

COVID-19 has halted this upward trend. Uncertainty surrounding the virus has forced many university and college courses online, with students remaining in their own countries to pursue them. The resulting drop in income for tertiary institutions and service providers who depend on the yearly influx of foreign students has been sharp. Meanwhile, international students who remain here have registered their disappointment at being charged full fees even though the “university experience” has been severely curtailed.

Minister of Higher Education, Simon Harris, has indicated the government will take steps to strengthen Ireland’s brand as a destination for international students in the post-COVID period, but hasn’t yet announced the details of this plan. Here are 10 things we think they can do to make the country more attractive to international students:culture

International students, particularly those from non-EEA countries are subject to fees that are significantly higher than Irish nationals. While Irish students’ fees are capped at €3,000, foreign students can have fees ranging from €9,000 to  €20,000. Meanwhile, those studying medicine can find themselves with fees upwards of €54,000. Worse, most tertiary institutions have built in year-on-year increases into their fees.When airfare, rent, food, and the general cost of living are thrown into the mix, expenses quickly add up. The majority of international students are self or family funded. A cap similar to the one Irish students have on their fees could be helpful to them.

Like fee caps, scholarships go a long way to managing the cost of studying abroad for international students. An increase in the number of scholarships offered should be considered. Currently, the government offers around 60 fully funded scholarships for all levels of study to internationals. Even combined with those sponsored privately by universities and corporations, a large portion of foreign students are on their own when funding their education. Recent announcements like the €1.5 million in scholarships to Indian students may be the way to go in the future.

Getting into university can itself be a gruelling experience, but the application process is twice as hard and time consuming when you are an international student. Government and tertiary institutions can work together to make this process less frustrating and bureaucratic.

The difficulties international students face don’t end with financing courses and the visa application process. It’s one thing if you have family or friends that can offer you a place to stay during the course of your studies, but most foreign students don’t. If you’re not so fortunate, finding a place to live presents a challenge of its own. This is one area where the government, collaborating with tertiary institutions, can augment quality of life for those internationals who chose to study here.

Students leave their home countries when their desired course of study is not available locally or is not as highly ranked as those found elsewhere. Here, the government  and tertiary institutions have an opportunity to promote the country’s universities as offering best-in-class degrees. With Ireland hosting some of the world’s largest corporations, every opportunity should be taken to collaborate with them in formulating courses.

Having said that, reducing the time it takes to be awarded a qualification should also be considered. We have already explored how expensive pursuing an education is for foreign nationals. A reduction in the time spent doing the degree will reduce costs.

Moreover, it’s not unprecedented. Google is pioneering a series of cheaper, short certificate programmes that it thinks will replace four year tech degrees eventually. Less time intensive, lower cost options for internationals is something a prospective student would take into account when choosing a country in which to study.

Japan has appeared on several top international student destination lists over the last few years. This wasn’t always the case. The Japanese government and universities have invested heavily in promoting the country abroad and this has paid dividends. Minister Harris has noted that evidence suggests that Ireland is becoming increasingly popular with international students. Post COVID 19, the government may want to do some research on why this is and base an extensive marketing campaign on the result.

One of the key reasons anyone leaves their home to do a degree in another country is to have the “student life” experience. Whether it’s experiencing local culture, learning a new language, taking in the sights, or making lifelong friends, internationals return to their countries of origin with a host of memories. One of the best ways to ensure that more foreign students come is to make those memories positive ones. 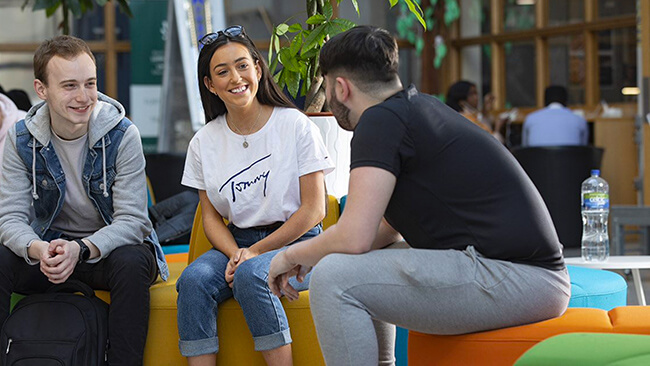 10. Getting the local population on board

A recent survey shows that 76% of its respondents had “extremely positive” experiences while studying in Ireland. Obviously, international students will avoid countries that are hostile to their presence. The public’s cooperation in creating a welcoming environment is key. Government may want to consider that it’s not just international students that need marketing, but the general public too. They should be brought in as full partners in the process.

Those are our suggestions for making Ireland more attractive to international students. What are some of yours?