Have you ever wondered how Ireland’s unemployment benefits compare to our EU counterparts? Are we over- or under-performing in this area?

Throughout 2021, the Irish Congress of Trade Unions (ICTU) have been pressuring politicians to reevaluate our current “inadequate” unemployment benefit. In June of this year, Leo Varadkar said when the Pandemic Unemployment Payment (PUP) is wound down, an opportunity will arise to reform the current system. From mid-November, the PUP was cut from €250 per week to €203 – this is the standard unemployment benefit in Ireland.

The proposed reform seeks to follow in the footsteps of a number of our EU neighbours. Rather than receive a flat rate (€203 per week is our highest rate), your benefit would be linked to your previous salary. Most Western European countries use this system whereby your benefits are based on a percentage of your last earnings. It certainly makes sense. In Ireland if you are over 25, just out of college looking for work, you are on the same benefit as someone that was previously in a €100,000 a year job.

So, are these reforms on the horizon? Yes, but it’s a distant horizon. Initially, they were supposed to be introduced as the PUP was phased out in February 2022. However, the design and operational features won’t be finalised until the end of 2023, so we will have to wait. Let’s have a look at how Ireland’s current system compares to our EU neighbours.

Of course there are a number of bureaucratic hoops people must jump through to receive these benefits. Without going into detail on what these are for each individual country, the following figures are assuming you fulfill the criteria. 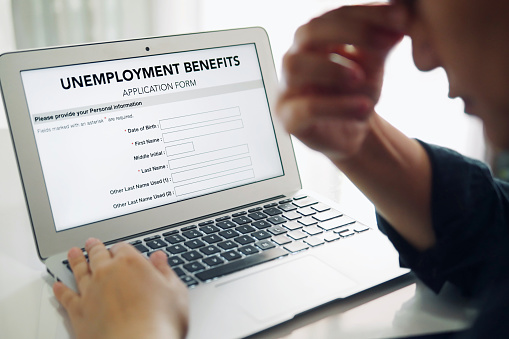 If you are unemployed in Ireland, you may be eligible for either Jobseeker’s Benefit or jobseeker’s allowance. To avail of these payments you will have to tick a few boxes, including:

In both Jobseeker’s Allowance and benefits, the maximum rate is €203 per week. If you are claiming Jobseeker’s Allowance and are between 18 and 24 years of age, the maximum rate is €112.70. Basically, the government expects everyone in this age bracket to be living with their parents, or to have a job. Even the higher rate of €203 per week – that’s €812 a month – won’t get you far in Ireland with the current cost of living.

The estimated monthly cost of living for a single person in Ireland is €844, and that does not include rent. Surely our unemployment benefits are in line with our EU counterparts. Well, let’s see.

The percentage of your previous wage that you are entitled to is:

Estimated cost of living for a single person is €800 per month (excluding rent).

The Netherlands uses a similar system to that of Belgium. If you are unemployed in the Netherlands you receive your benefit on a monthly basis. You are entitled to:

The maximum payment you can receive is €223.40 per day! To put that into perspective, an unemployed person in the Netherlands (that was previously earning a high salary), can receive more in a week than an unemployed Irish person can in a month.

There is a catch, you are only allowed to avail of these benefits for three months, although there can be extensions. After six months, you must accept any job offer, regardless of role or level. The government reimburses any transportation costs. I would class the Dutch system as tough, but fair.

Estimated cost of living for a single person is €851 per month (excluding rent).

The Danish system consists of a wider range of categories. Firstly, once you become unemployed you must fill out a form within the first two weeks and include your CV. In the form you must state whether you are available to work 30 hours a week, which is part-time ensured, or 37 hours a week, which is full-time ensured. Your unemployment benefit depends on your previous salary, but cannot be more than 90% of it.

The highest unemployment benefit you can receive if you are unemployed is:

If you have just completed education or training:

If you have just completed education or training and have children:

And the highest amount you can receive if you are under 25 is:

There are multiple rungs on the Danish welfare ladder, and their lowest rung, an 18-24 year old willing to work part-time, still receives a greater amount than an unemployed person in Ireland.

Estimated cost of living for a single person is €996.50 per month (excluding rent).

In Germany all workers must pay unemployment insurance whilst they are working. It is 2.5% of earned income. I’ll explain why that is noteworthy in a moment. Their standard unemployment benefit is also a percentage of the net wage they received per day during the 12 months before they became unemployed:

For 2021, the maximum amount you can receive was capped at €7,100 per month in West Germany and €6,700 for East Germany (they are still separate economies). You can avail of unemployment benefit for a maximum of 12 months, or 24 months for older people.

Estimated cost of living for a single person is €861 per month (excluding rent).

The basic amount for unemployment benefits in Austria is:

You are guaranteed this benefit for a minimum of 20 weeks. If you refuse an offer to work or a chance to receive vocational training you may receive sanctions, like your benefit being suspended for 6 weeks. Consequently, the period in which you can avail of the benefit is reduced.

Estimated cost of living for a single person €840 per month (excluding rent).

I know what you are thinking, Ireland is not looking great so far. In fact, compared to our EU neighbours, our unemployment benefits look terrible! Let’s step outside the EU for a moment to see how we measure up to our closest neighbour. Jobseeker’s Allowance in the UK is:

This payment is received every two weeks. It is hard to fathom how any person could survive on this amount of money for any period of time.

Estimated cost of living for a single person €774 per month (excluding rent).

How do we compare?

Ireland and the UK operate on a similar system –  i.e. a flat rate, regardless of previous income. It appears that Ireland and the UK operate with a different ethos to that of our EU neighbours. We make unemployment benefits very unattractive (not enough to even cover the cost of living), which should incentivise you to find a job. Conversely, the EU countries mentioned in this article adopt an approach whereby they sufficiently support your period of unemployment, as it is not supposed to be long-term.

I think this table highlights the fact that just because a country offers better unemployment benefits, it doesn’t necessarily mean citizens will abuse it. If there are efficient procedures in place to help people find work, then the government can afford to be more supportive with unemployment benefits.

The EU countries’ systems have other advantages. Firstly, they offer help with household budgets so that your living standards don’t collapse. Additionally, the system helps citizens maintain their levels of consumer spending, so that businesses don’t suffer.

Hopefully we will witness this improved system by 2023. Of course, there is the underlying issue in this country of people remaining on Jobseeker’s Allowance indefinitely, too lazy to work. The argument could be made that if the amount of money is increased, so too will this issue. To combat this issue the government will need to work with employers to offer a greater incentive to work. Perhaps we could use a model similar to the Dutch system, compulsory job acceptance after six months. Time will tell.

We use cookies on our website to give you the most relevant experience by remembering your preferences and repeat visits. By clicking “Accept All”, you consent to the use of ALL the cookies. However, you may visit "Cookie Settings" to provide a controlled consent.
Cookie SettingsAccept
Manage consent