The importance of a power pose is commonly misunderstood. Growing up, we constantly hear about the importance of body language and to sit up straight or pull our shoulders back, but few people actually understand how much of an impact it has. It not only helps how others perceive us, but it helps with performance as well. Certain “power poses” do not just change the look of your body, but they change your body’s chemistry in order to affect the way you do your job and interact with others.

The idea of a power pose is to take up as much space as possible. You’re being commanding and demand attention, whereas when you hunch your body into smaller positions it is easier for people to not take you as seriously as you would like to be perceived. By extending yourself out as much as possible by putting your feet on your desk, rolling your shoulders back and crossing your arms, planting your hands on the desk and leaning forward, or even squinting your eyes slightly, you can raise your testosterone levels by 20 percent causing you to feel more dominant.

Body language is a nonverbal way of communication and is an important signifier and communication vehicle. It can tell us everything about a given situation in a matter of seconds. One’s character can be perceived by a mere glimpse of a small gesture. The Power Pose is the most important element of body language as animals also partake in specific poses.

This pose is one of the most common high-power poses. Much like a victor who pushes their firsts in the air for a victory celebration, this pose is quite similar.  Whether you are hitting the arms in a “V” stance, or sitting at a desk where you put your hands behind your head, lean back, and push your head into your hands, the victory pose gives you a sense of pride and makes you feel like a winner. 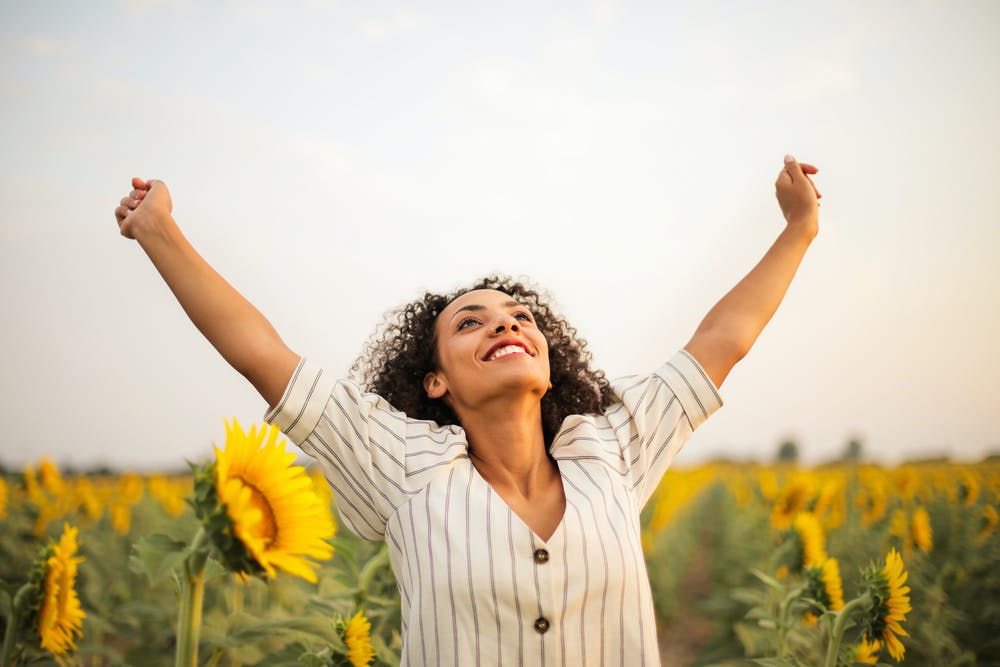 Before an interview, plant your feet widely and stretch your arms overhead in a V-shape as if you are hearing the applause after a performance. Do it in a private setting because striking a high-power pose in your interviewer’s office could come off as offensive or rude. Hold the pose for two minutes. By doing so, you are enabling hormonal changes to be set in motion in order to give you the confidence you need. This pose rewires your mind and body to believe you are already a winner and builds confidence.

This pose is known for its ability to change your mood as well. If you are feeling fatigued or sad, try holding to pose for 5 minutes. By the end of the session, you should experience a little more pep in your step. Your body and mind are more connected than you realize. By opening up your body, you decrease your cortisol levels. Cortisol is known as the stress hormone in the body, so when you decrease your stress levels, you will be able to function better. 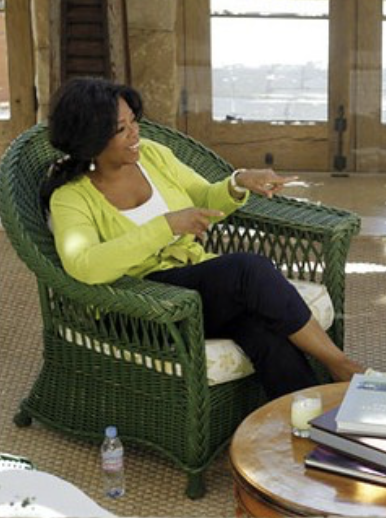 Let’s move on from going to an interview, to conducting one. While conducting an interview, rest your arm on the back of your chair, keep your knees apart, and recline. This pose is often one by Oprah Winfrey, as she has mastered the art of “leaning in” by leaning back. It is perfect for asserting your confidence and comfort level when interviewing a candidate. The candidate does not feel intimidated by having an interviewer in their face, but they are relaxed and comfortable because the interviewer is leaning back.

If you are being interviewed for a job, the CEO pose may not be for you as it can appear like you are uninterested in the job or cocky. Hunking down in your chair and looking small is an open door for people to walk all over you because you do not appear to believe in yourself. Instead, open yourself up, and sit up straight. When you have mastered how to powerfully portray yourself that way, lead back a little, but do not lose your posture. Leaning back makes you look casual and helps everyone relax, but by keeping to posture, you are still showing signs of power. Tilt your head slightly to one side because it can come off as friendly and open. This pose is similar to The Obama power pose.

Barack Obama II was the 44th president of The United States. When he was the commander in chief, he could often be seen with his feet propped up on the Oval Office desk. This pose is not easy to pull or, but resting your feet on your desk and placing your hands behind your head can potentially lead to more profitable risks, like your next big idea. This pose is recommended for a more personal setting in order to empower yourself. Self-motivation can be hard when you are in the midst of a roadblock, so holding this pose for a couple of minutes can help the brain to relax and focus on the task at hand. 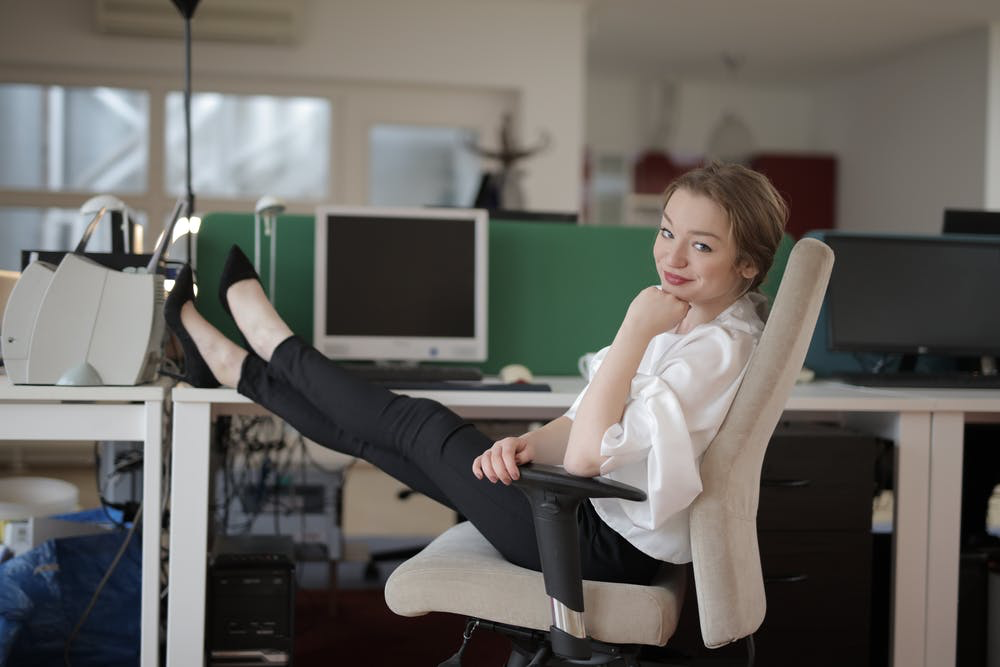 Have you ever subconsciously wanted to put your feet up-on a sofa, stool, or table after a long day? Well, it’s because your body wants to relax. Obama was seen placing his feet up on the desk during important phone calls because it was both comfortable and relaxing. When you are relaxed and comfortable, your confidence levels increase. You are able to motivate yourself and become empowered to do what you need to do without overstressing on the matter. Not to mention the lower back and sacroiliac relief propping your feet up can have. 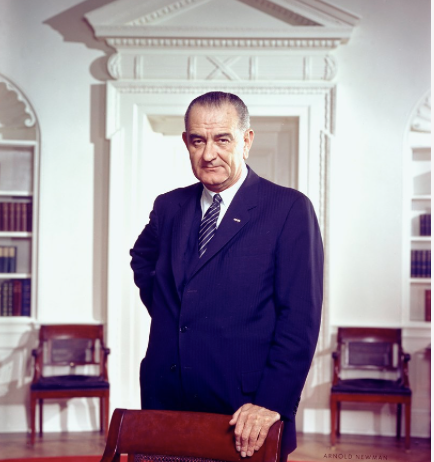 This pose is named after the former 36th United States President, Lyndon B. Johnson. The pose has coined the nickname “The Loomer”. Johnson was 6’4”, and he used his height in a thoughtful way in order to both intimidate and seduce. Place your hands on a table, desk, or counter and lean slightly forward. The pose would be great for a business scenario, but it can be performed when you need to exhibit power. The lean and hand placement creates a dominant and intimidating posture. It is subtle and not over the top, so viewers do not feel attacked while you manage to command the room and demand attention.

The pose exemplifies the most confidence and controls out of all the power poses. When talking to your boss or another authority figure, puff out your chest, plant your hands on your hips, and stand with your feet hip-width apart. This is a classic crime-fighting pose, and it can be helpful with calming nerves and giving you the edge in order to bring up any point you feel is necessary. Tilt your chin up slightly to maximize the power you will have at the moment. This pose helps open you up while talking to someone and has the opposite effect of slouching, touching your neck, and being skittish. This pose helps you push past anxiety and helps you show a sense of control within the situation.

What is interesting is the effect the Wonder Woman pose has on the person doing it. Posture is not just a way to communicate to an audience: it is a self-esteem booster. Because of the body language of the Wonder Woman pose it is also called “confident posture” because of the chest being pushed out and erect spine, so standing like Wonder Woman is not just an impressive look when asking for a raise, but it can have an improvement on your own self-worth. When Wonder Woman first came out, and she hit her signature pose, it was an act to give women a context in which to stand powerfully and make confident demands.

The Wonder Woman stance is an excellent feminization of power. It is a way for the ladies to be in control, and they do not need to act like men despite being told we need to do so in order to get ahead. The idea of being “powerful” is very much confused with being “masculine”. Women do not need to act like men in order to gain power, but women who embrace their “Amazon” characteristics will show the same power, confidence, and control in the situation as their male counterparts. Maintaining the Wonder Woman pose allows the individual to take up all the space even if they are the smallest one in the room, so next time you are in a meeting, try cancelling your inner Wonder Woman and see how your self-confidence changes.

Body language matters, especially when in the presence of other people. Nonverbal displays such as a smile can signal to others a person feels good or is happy. Other displays can show confidence within another individual, and when done right, can show your sense of authority. However, the poses stated above do not work for everybody because there is also a mindset element that plays along. If the power posing does not work for you, maybe try confidence-boosting strategies instead.